If you were an avid or even passive viewer of television back in the seventies you would have certainly heard your share of advertising jingles being sung during a multitude of commercials for every product imaginable. Burgers. Beer. Bananas. You name it.

They were not only inescapable, but some even became cultural touchstones. Everyone is familiar with such all-timers as McDonald’s “You Deserve a Break Today” (written by Barry Manilow, no less) and “I’d Like to Buy the World a Coke,” which – spoiler alert – figured so prominently years later in the conclusion of “Mad Men.” Those jingles, and a handful more, defined the commerciality of the “Me Decade” as much as anything.

But did you know that occasionally one or another of your favorite music stars back then would anonymously slip behind the mic and let loose on a major-league jingle or two (or three) in return for a fistful of green stuff? (Dollars, not dope, in case you were confused.)

Yep, and for the most part, the public never knew. Though if you wondered why some jingles just sounded so good, so preposterously singable – well, that was a big part of the reason. Those were pros at work doing what they did best, surreptitiously crooning “ear worms” that you just couldn’t get out of your head.

So, how about an example, right? I’m glad you asked! Below is a TV commercial I culled from my personal archives that features the famous ponytailed frontman of a major hit-making American ‘60s/’70s rock and roll band (that no longer exists) extolling the virtues of a product, in this case a car brand, that also no longer exists. Any guesses as to who the gifted vocalist was/is? Well, if you came up with the name “Mark Lindsay,” then you clearly know your stuff.

Yes, the lead singer (and often producer/arranger/writer) of many a memorable Top 40 smash for Paul Revere and the Raiders also did solo work. And not just on hit singles of his own like “Arizona,” “Silver Bird,” and “Miss America.” Mr. Lindsay sometimes additionally contributed his talents toward helping us all know a little bit more about what we ought to buy. Or at least consider. Think Yamaha motorcycles, Levi’s blue jeans, and Kodak film. He cut a bunch of ‘em.

In the current instance, as you will hear, Mark is in smooth, full-on Adult Contemporary mode, as opposed to rocking out. Both of which he was equally adept at doing, by the way. Just put on some headphones or AirPods and crank up the Raiders’ giant hit “Hungry” from 1966. It’ll make your hair stand on end. The man simply OWNED every last fevered note on that classic. Growling, cajoling, pleading. Letting the world know in no uncertain terms that whatever he wanted was gonna be his for the taking – just try and stop him. Is it any wonder that Quentin Tarantino featured the song in 2019’s blockbuster film “Once Upon a Time… in Hollywood”?

Anyway, back to the topic at hand. Note that during the jingle Mark sings about freedom being “just another name for Datsun.” Which is interesting, at least to me, since his label mate (and in-studio drinking buddy) on Columbia Records, Janis Joplin, opined on vinyl so convincingly and famously just three years earlier (in 1971) that, “Freedom’s just another word for nothin’ left to lose.” Hmm… well, if both statements are true, then I guess that doesn’t say very much for the value of a Datsun, does it? No wonder they went out of business (actually the company morphed into what became Nissan).

Okay, here we go—please enjoy the exceptional (and exceptionally rare) vocals of Mr. Mark Allen Lindsay in a commercial from May of 1974 (just click on the image below): 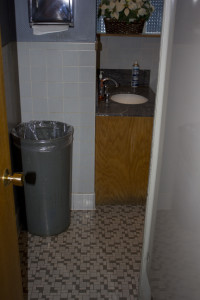 Inside the men’s lavatory at Ocean Way Recording, looking exactly as it did 50 years ago.

Once in a great while, if a person is lucky enough—if the stars line up just right—they might find themselves watching actual history take place. I’m here to say that I am one of those people. Well, at least I saw where “history” used to take place.

Sure, there are some who have witnessed presidents being sworn in or Apollo rockets being launched or any of a variety of improbable major league sports-related milestones being achieved—certainly all laudable events. But how many can say that they have actually seen where a legendary crooner used to go to the bathroom?

Now, before you left-click your way onto another site, let me explain. Having had the good fortune of hanging out at many an old-school recording studio in LA, one day a couple of years ago I found myself inside Ocean Way on Sunset Boulevard.  The birthplace of countless platinum albums from over the years (think Clapton, Petty, the Stones and more), the studio was originally known as United Recorders way back when it was built at the beginning of the ’60s. And one of the initial part-owners was none other than Frank Sinatra himself, who did most of his Reprise recording work there.

On my visit, courtesy of the BBC, who flew me in to appear in one of their documentaries, I received the grand tour. As I tried my best to not drool while checking out all the incredible recording gear, the magnificent mixing console, and the unparalleled Neumann microphone collection, my guide also insisted that I take a gander inside the adjacent men’s room. “It’s where Sinatra used to go,” he said, clearly in awe.

With eyes wide and camera in hand, feeling like I was entering a hall of greatness, I dutifully then stuck my head inside the smallish, retro-tiled chamber and took several photos, one of which is shown here (along with a shot of Frank on the wall in the hall and another picture of his onetime upstairs office). 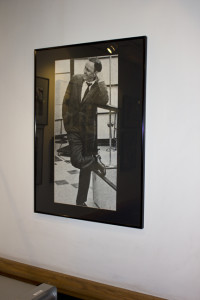 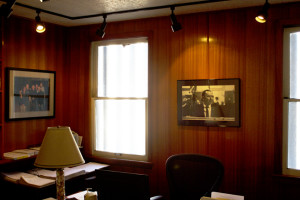 Frank Sinatra’s former upstairs office at Ocean Way, looking virtually identical to the way he had it in the ’60s. 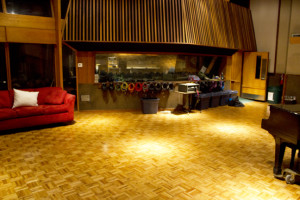 Studio A at Ocean Way, formerly United Recorders, where Sinatra cut “Strangers in the Night.” 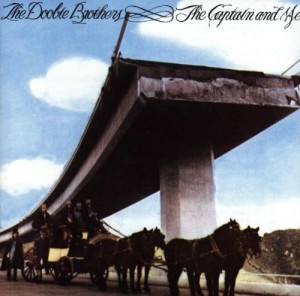 Sounds like the title of an old Doobie Brothers album, doesn’t it? Well, it is—and a great one at that. Maybe their best, from back in 1973. “China Grove” and “Natural Thing” are tough songs to beat. Given, too, that I recently wrote a book about the music biz, that would be a pretty darn good guess as to the topic at hand. But, that’s not what I’m referring to here. Nope, not this time around. I’m talking about an actual man. Perhaps, I might add, one of the most famous men in America during the Sixties and Seventies. Revered, even. And, much to my surprise, this man—a burly ex-Marine, no less—insisted upon hugging me when we first met. Me, that is, and about three hundred other people.

No, it wasn’t one of the Village People (yes, I know what you’re thinking…). Huh-uh. Instead, it was none other than Captain Kangaroo himself, Bob Keeshan. In 1999, the good Captain wrote a memoir about his days spent in the Treasure House on TV and he came through Seattle on a nationwide book tour to support it. Living in the Emerald City at the time, and thoroughly grooving on all things retro even then, I made a beeline for his book signing. And I couldn’t be happier that I did.

As I finally made my way up to the Captain’s table, after standing in line for at least two hours along with every conceivable manifestation of the human species, my entire childhood instantly flashed before my eyes. There he was: the man who had patiently read a story to me (or “stirry,” as he pronounced it) every weekday morning of my early single-digit years. Mike Mulligan and His Steam Shovel, anyone? The man who was constantly outwitted by Bunny Rabbit and who fell for Mr. Moose’s knock-knock jokes every time, getting a shower of ping-pong balls on his head for his trouble. 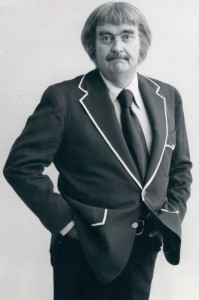 But before I could open my suddenly-dry, thirty-nine-year-old mouth to form any kind of comprehensible sentence, the Captain asked me my name, I mumbled a faint reply, and then he motioned for me to come around behind the table. There he gave me a hug like he had known me all my life. And, in a way, he had. He knew millions of us, his surrogate kids. A kindly-looking grandpa-sort, Captain Kangaroo was nothing short of beloved. And that’s why the Captain’s trademark jacket with the oversized “kangaroo” pockets is on display, to this very day, in the Smithsonian Institution. 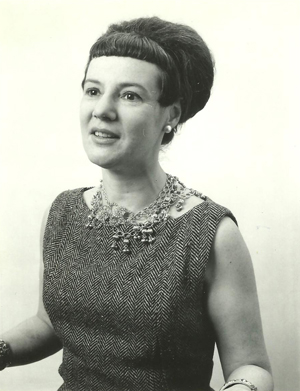 Recognize the woman in the photo? No? Well, her name is Judy Protas and she is both 91 years young and the happiest person you would ever want to meet.

END_OF_DOCUMENT_TOKEN_TO_BE_REPLACED 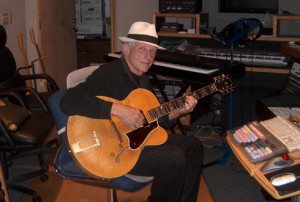 So talented is Wrecking Crew guitarist Don Peake that Ray Charles “borrowed” him for the better part of a year in the mid-Sixties, making Peake the only white musician in Charles’ incomparable band at that time. Peake went on to add his impeccably tight rhythm playing (and occasional arranging) behind the scenes for a multitude of stars such as Bobby Darin, the Righteous Brothers, Sonny & Cher, the Mamas & the Papas, the Beach Boys, the Monkees, the Jackson 5, and many others. 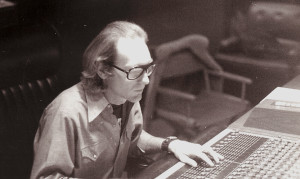 Grammy Award-winning music producer Bones Howe spent several decades in Hollywood cutting dozens of Top 40 hits for artists such as the Association, the 5th Dimension, the Mamas & the Papas, Elvis Presley, Johnny Rivers, and the Turtles. In the 1980s Howe became the Executive Vice President of the Music Department at Columbia Pictures where his film credits as music supervisor include About Last Night, Back To The Future, and One From The Heart. 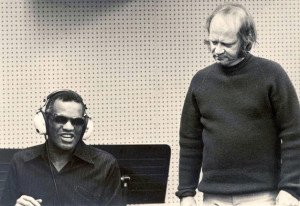 Today considered to be the world’s premier jazz ukulele player, Lyle Ritz actually started his professional life in the early Sixties as one of the most important electric and string bass players in the Los Angeles-based Wrecking Crew. Producing giants like Herb Alpert, Phil Spector, and Brian Wilson simply wouldn’t record without the services of the preternaturally gifted Ritz. Still ready to jam on his beloved ukulele, Lyle Ritz lives in semi-retirement in Portland, Oregon.
Top songs include: “A Taste of Honey” – Herb Alpert & the Tijuana Brass; “You’ve Lost That Lovin’ Feeling” – Righteous Brothers; “I Got You Babe” – Sonny & Cher; “Good Vibrations” – Beach Boys.

It might have gone a bit under most people’s radar, but Sean Bonniwell, the lead singer and main songwriter of the band the Music Machine, passed away at the age of 71 in December, 2011.

For anyone like me who goes back far enough or just digs Sixties-style proto-punk, the Music Machine’s 1966 (and only) Top 40 hit, “Talk, Talk,” is about as good as it gets. It had a real snarly, nasty sound. Two minutes of total ‘tude at a time when folk rock from Wrecking Crew-played efforts like “California Dreamin’,” “Eve of Destruction,” and “Mr. Tambourine Man” had become the message-song darlings of Top 40 radio.

The Music Machine also bucked the prevailing LA trend at the time by playing their own instruments. In fact, the bass player was Keith Olsen, who went on to work at Sound City Studios in Van Nuys (a Los Angeles suburb). Olsen engineered and produced dozens of gold and platinum albums there for the likes of Fleetwood Mac, Joe Walsh, Jefferson Starship, Pat Benatar, Eddie Money, and many others. All great stuff. But give me the in-your-face insolence of the Music Machine any day, ya know?

But, hey, what do you think? I’m curious—do any other bands come to mind from that era in LA that were also obvious garage rock pioneers???