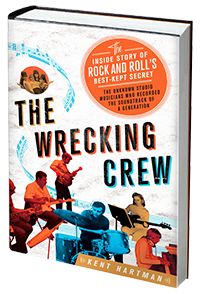 The Wrecking Crew:
The Inside Story of Rock and Roll’s Best-Kept Secret

Author Kent Hartman’s high-profile book from St. Martin’s Press tells the story of the Wrecking Crew—the uncredited LA-based studio musicians who secretly played all the instruments on literally hundreds of famous Top 40 hit songs during the Sixties and early Seventies.

From the Beach Boys to Frank Sinatra, from Phil Spector’s legendary Wall of Sound to the Mamas & the Papas, the Byrds, Simon & Garfunkel, and far, far beyond, the Wrecking Crew saw it all… and played it all!

Click here to order the book signed by the author, or click the links below to order it from your favorite bookseller.

“I’ve been in the music business for over forty years and I didn’t know any of this! The Wrecking Crew is a total page-turner. I couldn’t put it down. Kent Hartman is one gifted storyteller.”