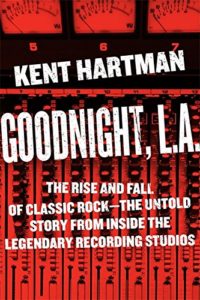 In an era today where hip-hop, country, and fluffy pop songs seem to dominate the media’s attention, let’s not forget that there are still millions out there who love their classic rock from the seventies and eighties. Maybe you’re even one of them. If so, then Goodnight, L.A. is for you. It’s the never-before-told, behind-the-scenes story about the creation of hit record after hit record that came out of the epicenter of  it all, Los Angeles. Back when artists such as the Eagles, Tom Petty & the Heartbreakers, Fleetwood Mac, Warren Zevon, Chicago, REO Speedwagon, Loggins and Messina, and so many more willingly sacrificed everything in the hopes of somehow carving out a career in the music business.

What my first book, The Wrecking Crew, was to AM radio, 45-RPM singles and pop, Goodnight, L.A. is to FM radio, vinyl albums and rock. In particular, the countless interviews I conducted with music stars, record producers, studio engineers and others who were all there during the heyday has provided Goodnight, L.A. with a rare measure of depth and authenticity. At least I think so. And hopefully you will, too. If you end up enjoying Goodnight, L.A. even half as much as I did while researching and writing it, then I will have done my job. Though sad, it is no exaggeration to say that we will never see the likes of this music or the caliber of these performers again. But, man, it sure was great while it lasted!